I have dipped one toe into my first gentle forage of the year; gathering Alexanders leaves from the hedgehermitage garden to make a flavoured gin; so easy that even I can emerge from my end of winter nesting to make it happen.

Foraging is perhaps my favourite thing to do; it is mindful, creative, it helps me care for my body (both because it involves walking & because it offers me healthy things to eat), but most of all because it creates a relationship & an intimacy with the land and the plant people, especially those close to home.

But I must admit that part of me resists foraging at all because, once I put my foot on the helter skelter ride of gathering, time becomes a different thing. I am a terrible procrastinator but there is very little room for doing-it-tomorrow with plants. They move so quickly from one stage to another that the prized petal, leaf, seed, or berry, can be gone before I've even picked up my foraging basket. So much longing waiting for their return, so much sitting with patience waiting for the right time, and then whoosh and they're gone! It really gets me in touch with what's real, and with what endures for all its ephemeral cycles.

There have been years when I've missed the spring cleavers, most of the nettle seeds, the rowan berries, & I dream of them all winter and still regret not being braver, or more present, or less world weary. But, when it works, it is also precious to live by something other than chronos, the worldly time of clocks & four walls; to step into the flow of kairos, the sacred time of sunlight, moon cycles, seasons, & the ebb & flow of growth. To be swept along by the generous tide of green is a gift to be cherished.

Alexanders, also known as black lovage, wild celery, & horse parsley, are almost ever-present in our garden but they are particularly lovely in the spring when their young leaves are pulsating with new growth and, a little later, when their green-gold flower heads are beginning to open. I also love them in the winter when they turn to dry stalks topped with shiny black seed heads.

They look beautiful and the tiny birds love to use them as perches. They are all leaves at the moment though and have almost entirely obliterated our garden bench! 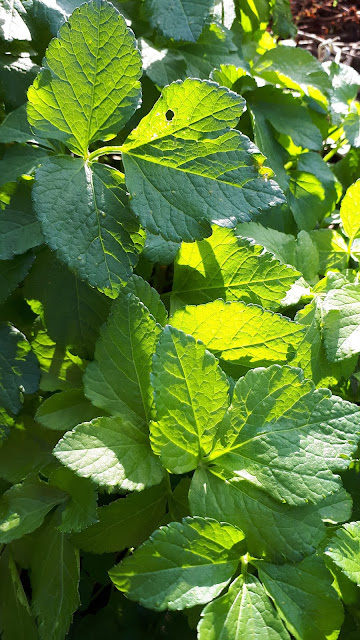 The Romans called this stately green being 'Parsley of Alexandria' & introduced it to Britain as a pot-herb where it has thrived, particularly on the coast, which is why we have so many here. Although it was brought here primarily as food (its flowers can be steamed or eaten raw in salads, & its sprouts, buds, & tops  blanched all year round, together with its spring stalks, its black seeds can be ground & used like pepper) it has been used as medicine since ancient times & was eventually planted in medieval infirmary gardens. It can still be found growing in monastic ruins. Originally, it is native to wild Macedonia, the birth place of Alexander the Great.


As a medicinal herb the juice of Alexanders' roots & seeds have been used on cuts & wounds, & its bruised leaves used to stop bleeding. Its seeds soaked in wine were used to stimulate menstrual bleeding, & its leaves eaten against scurvy. The leaves were also said to 'sharpen the appetite'. That it helped with digestion was one reason for its inclusion, with nettles & watercress, in 'Lenten pottage', a gruel eaten in Ireland during Lent up until the 18th C, which was believed to ease the 'viscous humours' gathered in the stomach through the over-consumption of fish. 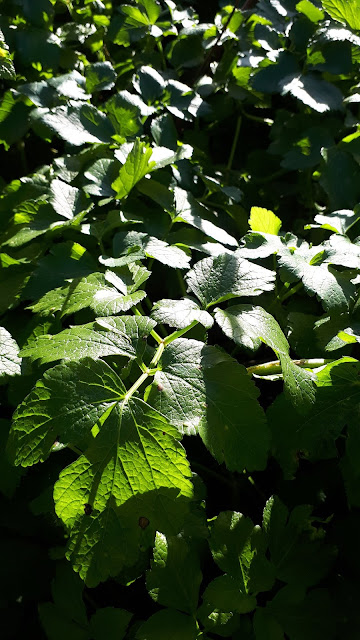 And so I pottered with my basket in the garden collecting Alexanders; they are wild & so to me that definitely counts as foraging. And we have SO many this year that gathering some feels essential! It is important though to be sure of identifying Alexanders correctly, as they are a member of the Umbellifer family which includes the highly poisonous Hemlock Water-Dropwort, although that is always found growing close to water. But there are others, like Hemlock, which it might be confused with. As I say, foraging builds relationship and the deeper that relationship is the better our ability to identify plants from their sisters.

Gathering these Alexanders I had to be particularly mindful as this year many of the plants have rust fungus (Alexanders rust, Puccinia smyrnii), which I celebrate as a being but don't really want in my gin. 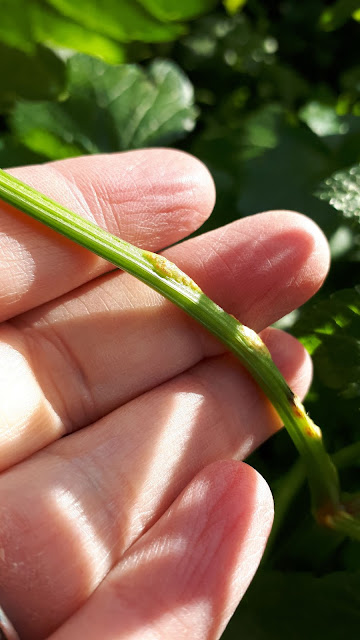 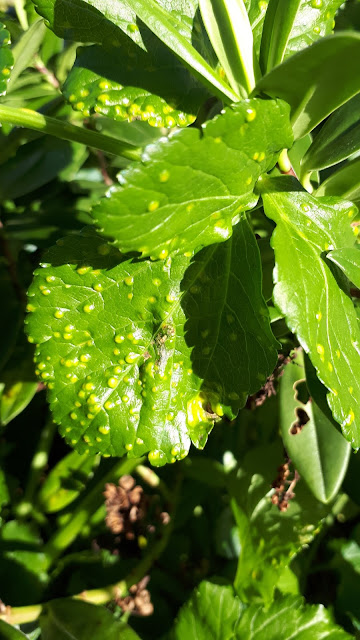 I was pleased with the leaves I did find though, & I feel more connected to the garden after the long winter months. 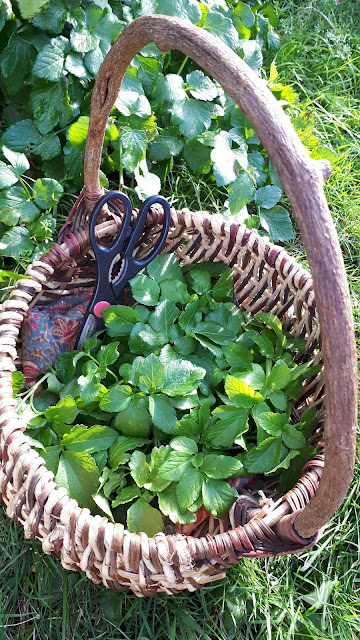 Having gathered the leaves, I carefully checked & washed them before slightly crushing the stalks (a bit of guesswork there but they smell lovely). 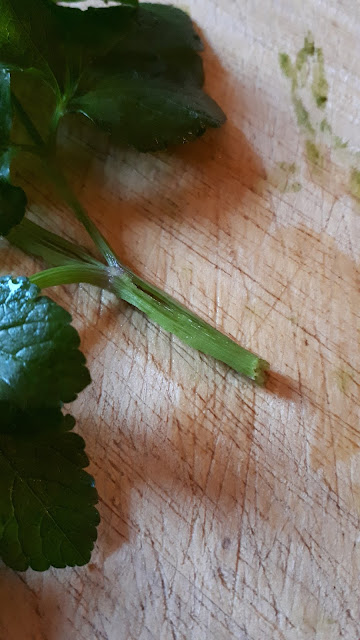 I then packed them loosely into a mason jar which I topped up with gin. You can also add sugar for sweetness at this point but I felt that I wanted to keep the pure flavour of the Alexanders as we move into spring. I'll leave them for three weeks or so & then strain them. I'm hoping that it will make a delicious spring tipple. So exciting! 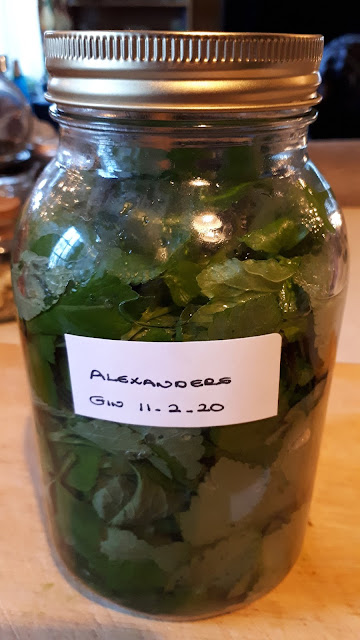 Solid Dennis helped with my Alexanders gin making too, although to be honest his attention span wasn't all that... 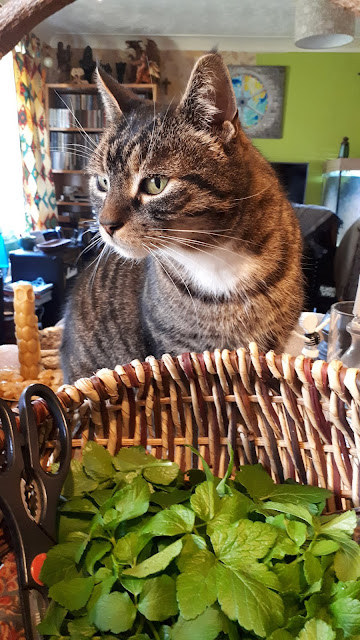 To read more about Alexanders & using them to flavour gin pop to these links:

Posted by Jacqueline Durban at 10:22