Singing for Hope on a Rainy Roundabout ~ Celtic Advent Day 16


I am several days adrift with my sharings for Celtic Advent and so I hope that I will be forgiven for posting several morsels today. There is so much loveliness that I want to share.

Firstly, I want to tell you a little about the Kent Christian Peace Activist 'Refugees Welcome' vigils, which take place from 7.30 to 8.30am on the first Friday of every month in Dover on the roundabout opposite the ferry terminal, which is where we found ourselves this morning. 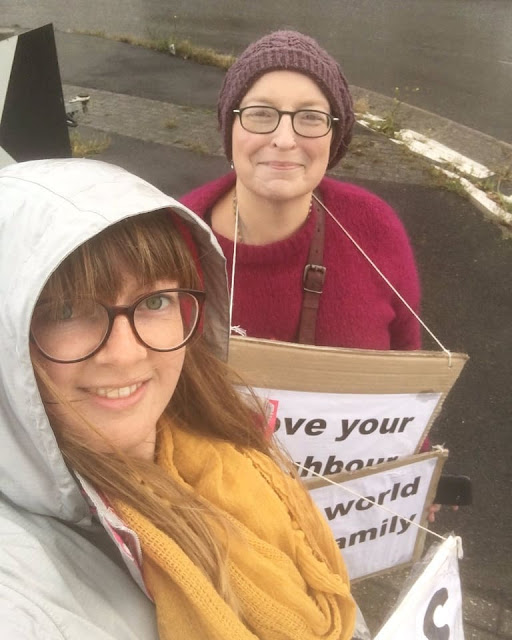 I have been attending the monthly vigil since October 2018 and it has added so much richness, and reality, to my spiritual life. I won't say that it's always easy. Often there are only two of us and we could so easily fall into believing that our efforts are futile. But even that provokes many conversations on hope and how to sing and pray for better in the face of, what seem to be, overwhelming odds against anything ever changing. As I wrote only a few days ago, we can't say that we truly have hope until we have stood on the bitter edge of despair, and in reality in this country very, very few of us have done that in the same way that refugees are compelled to do.

And so we talk about hope; about being imaginal cells, about the promise that God will change everything in an instant ~ how then can we truly despair ~ and today we talked about the feeling that "everything is going backwards"; that the anti-life cult of Empire and patriarchy is increasing its grip, but which might instead be us sensing the death throes of a dying system desperately trying to cling to power. I have believed the latter for many years, and in that time I have watched many deaths. It has always been my experience that just before death a being shines even brighter, a last burst of flame before the light goes out and transformation comes. I am sure that its the same with outworn and outmoded systems.

The root of this thought came when I went to a talk given by author Lynne Sinclair-Wood in London a decade or so ago. She lived in Australia but over the years had spent much time in the British Isles, and particularly in London. During her talk she expressed despair that it felt that money makers and financial institutions had a stronger grip on the city than they ever had before. But I didn't agree. What I felt was that what had been underground; an alternative way of being based in sharing, compassion, love, and justice, had become stronger, was rising up to meet the oppressive systems of greed that we have all lived under for so long. And that it was this sudden clash that she was feeling. When power-over ways of being fully held sway, felt unthreatened, there was no need to stem a rising tide of justice; then we were a river, now we are the sea. The grip of greed might have tightened but, if so, it was out of fear that the systems that fed it were crumbling. The human world turns slowly. It might take a lifetime for change to come. I may never see it but I know in my bones that it's coming, that the arc of the universe is always towards justice, towards Kin-dom.

Some would say that this is wishful thinking and idealism. I say, so what!? In a despairing world it doesn't matter whether this is objectively 'true'. It only matters that it helps us to have hope. This is the work; the work of Advent. It's what we do while we're waiting.

And so, this morning at 7.30am, we were standing on a cold and rainy roundabout in Dover, as we do every month. The police used to stop; sometimes they were nice, sometimes they weren't, but now they rarely stop at all. Perhaps they think us 'safe' or 'irrelevant', but I am mindful of all those who have been thought the same but who have 'turned the tables over' nonetheless. Often we are shouted at by drivers, and quite agressively so. And often, and increasingly, we are given hoots of support. Invariably the person we now call 'sausage roll man' drives past, eating his sausage roll and waving encouragingly. He has a fine beard. He often gives us hope on our most despairing days. Last month, a man who had waved at us from his car emerged from a hotel just near the roundabout as we packed up our things to leave and told us that we were doing a fine thing, that he worked in the hotel, and that if we ever got too cold and wet we should go in for a hot drink. The universe is moving towards justice, but we might not see that from our tiny human perspective. In which case, what we can do is gather up these sweet and fleeting moments into a brew and a balm to keep us standing up for what we believe to be right.

We often say that we are an 'Easter People'; that we are living a 'Resurrection life', and so we are when we must so often be born again from the ashes of despair, and living as we do on a planet of seasons where spring follows winter, summer follows spring. But we are also an Advent People in a constant state of waiting. Holding the tension between these two sacred truths is where we find the Holy One, arms outspread.

We wait until change comes, and that could be at any moment; every breath it's own small resurrection, or it might take forever. What we do while we wait is what matters.

Today it felt that our time on the roundabout was particularly joyous. Perhaps because we are waiting, expectantly and at times impatiently, for better, but we are also close to a point when we can put our waiting aside for just a little while ~ the Peasant King will soon be born and he will Turn the World Upside Down, just as he always has. If the anti-life cult of Empire ever thought that it was safe then it has always been wrong. Here, soon, is a vulnerable child who will break their frozen places into Light.


And so, we sang in the cold and the rain; 'Blowing in the Wind' ~ how many times can a man turn his head & pretend that he just doesn't see? ~ 'Jerusalem' ~ I will not cease from mental fight ~ 'O Holy Night' ~ a thrill of hope, the weary world rejoices, fall on your knees, O hear the angel voices ~ and 'O Come, O Come, Emmanuel' ~ O come, bright Daystar, come and cheer, our spirits by your advent here...

Singing, like poetry, breaks the world open, and so we did. There is hope in any voice that rises above the wind and the rain. This is the work we do while we wait; we keep our voices strong enough to rise above the storm. Whatever our faith, we find our ways to kindle hope. 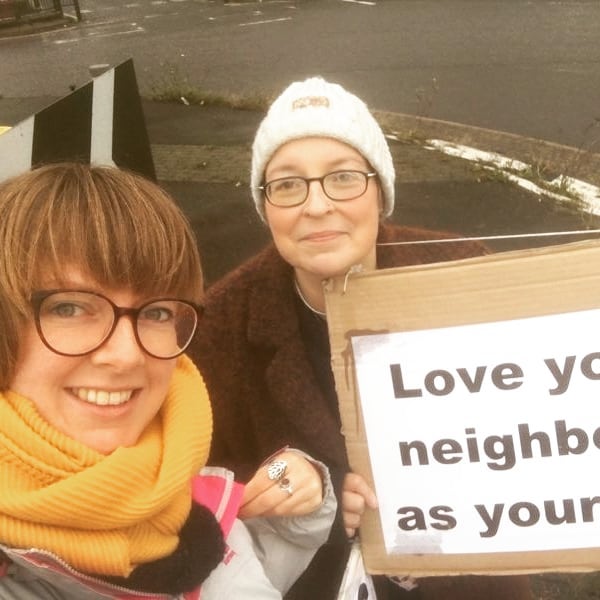 Posted by Jacqueline Durban at 09:02