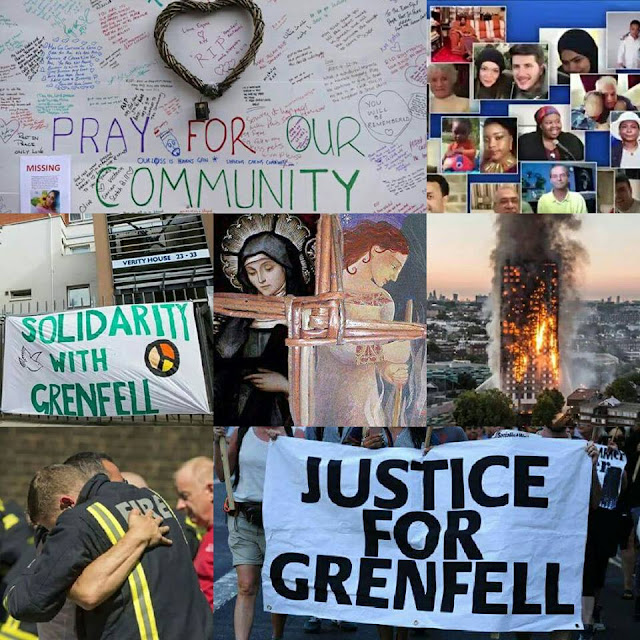 Here is the fifth of our Novenas for the Fallen Through, which for this month are devoted to Brigid and to seeking justice and healing for the victims of the Grenfell Tower fire. If you would like to read more about this work please pop and have a look here.

Today we weave a prayer honouring the creativity of the people of Grenfell, the loss of what they might have created, and the role of our own creative talents in continuing the journey towards justice.

I have talked a lot about Brigid’s three sacred fires during this novena. These are the fires of hearth and home, smithcraft, and of the fire that we will call upon today, poetry and inspiration; the ‘fire in the head.’


Blessing upon their noble nature,
to whom complex poems were no hardship,
to that beloved gathering of poets

the darkest verse was daylight dawning.
(Translated by Caitlín Matthews in ‘The Celtic Tradition’)

Brigid is the patron of ‘filidhact’; poetry and bardic lore, and of the filidh, the poet-seers, but she watches over all forms of creativity, such as storytelling, singing, and musicianship, especially harpists. There is a tale that Brigid once visited the house of a chieftain in Limerick, Ireland. She asked the chieftain’s sons to play for her the harps that were hanging on the wall, only to be told that the bard was away and that they didn’t know how to play. She then blessed their hands and they became wonderful harp players, famous throughout tha land and the bards of kings for generations. She need only touch us and our potential to create catches fire!

When I first began to hear news reports of the Grenfell fire, one of the names that came again and again was that of 24 year old artist Khadija Saye, who her friend MP David Lammy spoke of so movingly and eloquently in the days that followed. The day before she died Khadija had a meeting with an important gallery owner who had been so impressed by her work that he had asked to meet her. She was on the point of gaining recognition as a photographer and many of us will have now seen the haunting images that she created.
12 year old Firdaws Hashim, who died with her family on the 23rd floor of Grenfell Tower, had only two months previously won a debating contest judged by Bill Gates and journalist, Jon Snow. Jon Snow described her as “remarkably poised, confident, wise and eloquent, and using language beautifully.” He has since spoken of being haunted by the memory of her and what she might have been; “I was fortunate to witness that first hand and since then I often think, what might have she become? What were her life chances, once she’d been picked out in this way? Could she have prevailed over the fractures in our society and succeeded?'

Every one of the victims of the Grenfell fire is a huge loss but we have also lost their potential; what they could, and would, have been, the beauty, the magic, the power that they might have created. And it is on this loss that our prayer centres today.

This prayer begins with Fire.

We thank you, Brigid, for the gift of creativity,
the ability to break free from what is,
and to imagine and create what might be.

We come to you in deep gratitude for
all that the community who lived in Grenfell Tower created.

For the photographic art of Khadija Saye,
which shared with us the spiritual traditions of her ancestors
through images of presence and power.
For the eloquence, wisdom, and intelligence of Firdaws Hashim,
weaving words to provoke thought, to mend and heal us all,
and for her beautiful singing voice.
For the dancing and laughter of Ligaya Moore, who lit up the world with her joy.
For the intelligence of Nur Huda, who had just passed her exams.
For the creative talents, kindness, and sensitivity of Ernie Vital.
For the textile work of Majorie Vital.
For the poetry, art, and philosophy of Sheila Smith.
For the architectural design of Gloria Trevesan.
For the civil engineering skill of Mohammed Alhajali, who hoped to return to his
native land of Syria and help his country rebuild.

For all the dead of Grenfell and what they might have created.
For all the talents lost, the poems never written, the art never made,
the photographs never taken, the songs never written or sung,
of children’s drawings never shared, and dances never danced,
for notes never heard, for prayers never woven,
for stitches never sewn, and pots never stirred, for children never born,
babies never held, for words never spoken,
for the end of possibility and potential,
for the loss of wonder and bringing into being.

For all the living who experienced that night,
may the gift of creativity unlock what seeks to find the light
bringing healing and peace.

We thank you for our own gift of creativity,
which we can use in seeking justice for the people of Grenfell,
and for stirring the pot of memory so that they will never be forgotten.
We thank you for the songs written, the poems shared, the tears shed,
the hearts broken open and made wilder and braver by the Grenfell fire.
Let the spaces in our hearts be filled with inspiration,
and may that inspiration fuel the long journey to truth told
and wrongs righted, filling that journey with beauty and power.

We thank you for the inspiration that you bring,
the ‘fire in the head’, a more powerful fire than any that harms.
We ask that each spark of creativity lost to the Grenfell fire
fall to earth to be picked up again and brought into being
as a prayer to love and life and memory.
And let each spark join to build a fire of
beautiful resistance to greed and apathy
which we can carry with us to light the way,
making visible the world that we wish to create,
one song, one poem, one painting, one prayer at a time.

This prayer ends with Fire. Let it be the Fire of Inspiration.

Posted by Jacqueline Durban at 15:13